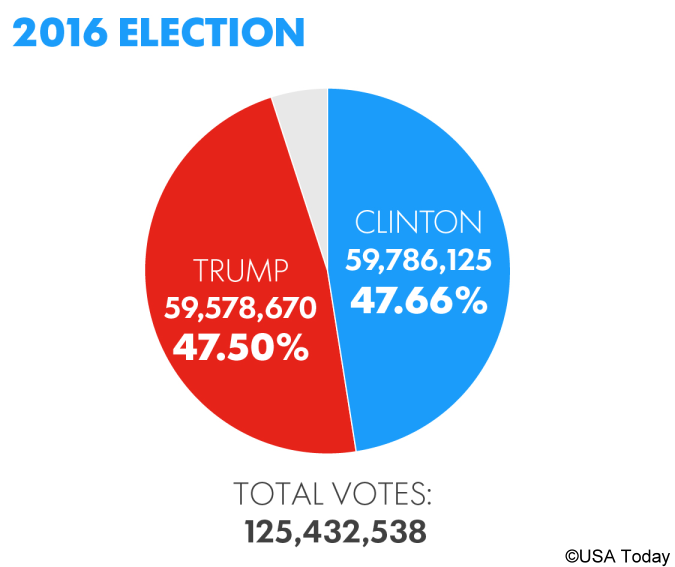 US Democracy Takes Another Hit

Now don’t get me wrong.  This is not because Hillary lost, as I did not vote for her or Trump.  But, like you I suspect, the result has left me feeling a level of angst.  However, it was not Hillary who was the big loser here, it was democracy in the USA.

As the graphic here shows, Hillary got the most votes.  In a true democracy, where every vote is equal, she would now be president–elect, with a 207,455 majority.  No small number.  But the Electoral College skewed that result by weighting the votes depending upon geographically where they were cast.

Read Nevil Chute’s 1953 novel “In The Wet” where he describes a skewed voting system based on multiple votes.  Beware though, the “N” word was in common use then.  It’s an extreme version of the Electoral College.  For my discussion on the college see this post.

Dispensing with the outdated Electoral College would have 3 immediate positive effects that would return the country to a true democracy. First, and most obvious, is that the candidate with the most votes would win (why does that sound so right?).  But second, it would stop the statewide minorities in states other than the “swing” states from being disenfranchised. And third, it would force the candidates to campaign in all states, rather than just handful, which would improve everyone’s chances of fully evaluating them outside if the (possibly biased) media.

There have been many attempts to abolish or amend the Electoral College.  One of the current ones is the National Popular Vote Interstate Compact.  So far 10 states plus Washington, DC have joined.  It is designed to make a state’s college votes be pledged to the national popular vote winner.  This effectively becomes a proxy arrangement.  Sufficient states must join to represent 270 Electoral College votes, so obviously has a long way to go.  It would also face serious challenges to its constitutionality, and would ultimately require a Constitutional Amendment to reverse the requirement that electing a president be by people state-by-state.

So don’t hold your breath!