Building a Virtual Remote Control for a Verizon FIOS DVR

I recently had the need to control my FIOS DVR remotely and as the iPhone app only works when on the same local network as the unit that was not an option.

So this project makes use of a Raspberry Pi with Node-Red and LIRC software installed to accomplish the same goal, along with a couple of features missing from the real remote.

The following assumes you are comfortable with the construction of circuit boards that connect to the GPIO interface of the Raspberry Pi.  The most important rule to remember is:

Make no connections or adjustments to the circuit connected to the GPIO when the Raspberry Pi is powered up.

This is the circuit diagram of the project: 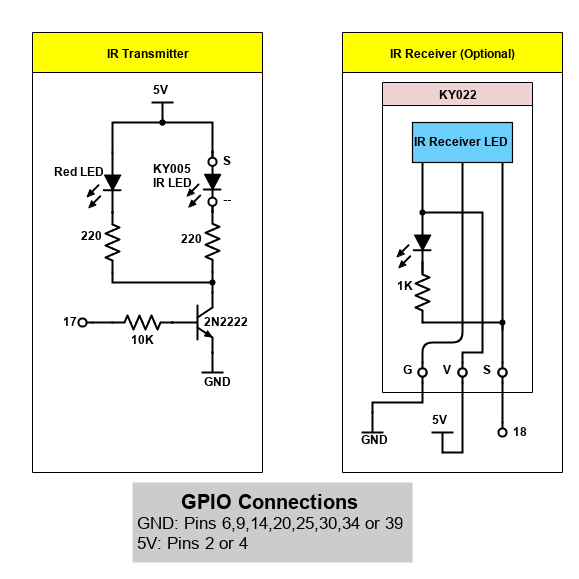 If you are going to use the FIOS configuration file you uploaded then there is no need to build the IR Receiver circuit.  This is only if you want to have the Pi learn some other remote controller codes and save them in your own configuration file. The command to learn codes is irrecord and more information on how to use it can be found with the command man irrecord or by searching on the web.

The purpose of the red LED in the transmitter circuit is to give a visual indication that signals are being transmitted, as infra-red is invisible.

Once the project is built you will need to test it.  I recommend breadboarding first before committing it to a printed circuit board.  Position the project near the FIOS DVR with the IR LED pointing towards it. 12-24″ should be enough.  Turn on the TV so you can see if the commands are taken.

Open the virtual remote in a web page.  The address will be something like http://<your ip>:1880/fios and will show a remote like the one above (but without the annotation).  Click on a few buttons to see that they work.  The red LED should flash briefly as each command is transmitted by the IR LED.  If the red LED does not flash make sure it it the right way around in the circuit.  If it does, but nothing happens on the TV, make sure the IR LED is the right way around.

The flow circuit is designed to allow queueing of commands, with each one sent 1 second apart.  So there is no need to wait for one command to complete before clicking another button on the remote.

When you click a button the “LEDs” at A will flash.  There are 3 of them distributed down the control because the entire controller is not visible on a small device like an iPhone, so there will always be at least one visible at all times.

The symbol at B will cause the Raspberry Pi to be rebooted.  A confirming dialog will appear before that happens.

The five buttons at C allow for automatic repeating of a button press.  It defaults to 1, but if you want to send 3 down commands for example, click the 3 so it turns green, then click the down button once, 3 down commands will be sent one second apart.

There is a bug in the daemon file /usr/sbin/lircd which causes the irsend command to hang if more that 2 commands are sent in quick succession.  I have created a page here describing how to patch and build the LIRC source and update the lircd file to fix this problem.

This is a fairly complex project and your mileage may vary considerably.  Unfortunately I am not in a position to answer questions if things don’t go well for you.  For example, I cannot help if you use different hardware or release of the operating system software.  The Internet is always your friend when you need an answer, and I developed this project entirely by researching there.  It was not necessary for me to ask any questions of the various web site authors. I used a Pi Zero W for the project, but there is no obvious reason why a Pi-3 or Pi-4 should not work too.  They’re just overkill!

Here are some sites that I found useful. All links open in a new tab (assuming they open at all!).  If the instructions there conflict with mine, go with mine!