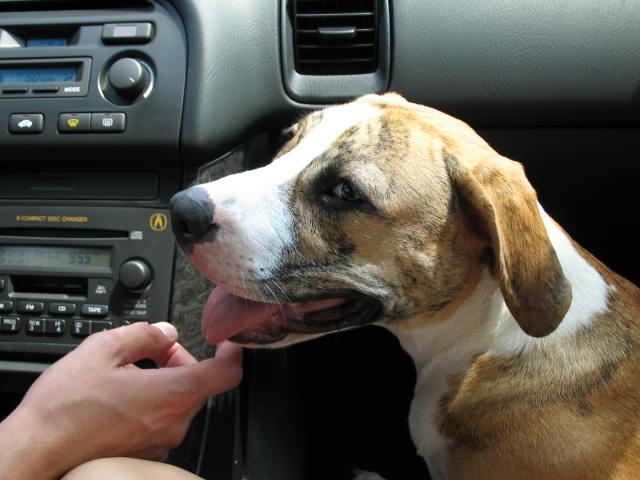 Yesterday Tank died.  But that’s not my focus today.  Remembering the 12 years of friendship and love he unconditionally gave to his family are.  His gentle and easy-going personality endeared him to all he came in contact with.

He did have one major failing though.  Tank was a pit-bull, and that breed’s reputation prejudiced many who did not know him.  Those of the breed are, of course, vicious and unpredictable killers, according to the stereotype.  But when Tank was in pit-bull school he was more interested playing tug-of-war and going swimming.  As a result his grades were deplorable, and he learned nothing about how to behave like a proper member of his breed.  So it’s because of Tank that we’ve had to revisit the stereotype, and conclude that it’s the human owners that cause the problems with pit-bulls, and not a flaw in the breed’s collective personality.

If you were fortunate to have met Tank you will know that there was not a mean bone in his body.  He loved tug-of-war and was incredibly strong.  He was, after all, built like a …. tank.  But his intelligence told him that his 2 little “sisters” were different, and he would offer no resistance when they took his toys away from him.   Anyone else and it would have been “game on” for a good ol’ pull.

I did say “easy-going” earlier, and mostly he was.  Unless everyone was in the pool except him.  Then he would “lose it” and become a real “brat”, racing around the pool and barking at full volume.  Until he was given the OK to dive in, which he loved doing.  A strong and competent swimmer, he never tired of being in the water.

Now he’s gone.  But his memory will linger for a lifetime and he will be mourned as a fully paid-up family member, because that’s what he was.  We can take comfort that he was not in pain during his last days and had his immediate family around him to ease his final hours.  Thank you Tank for all you gave, while asking so little in return.